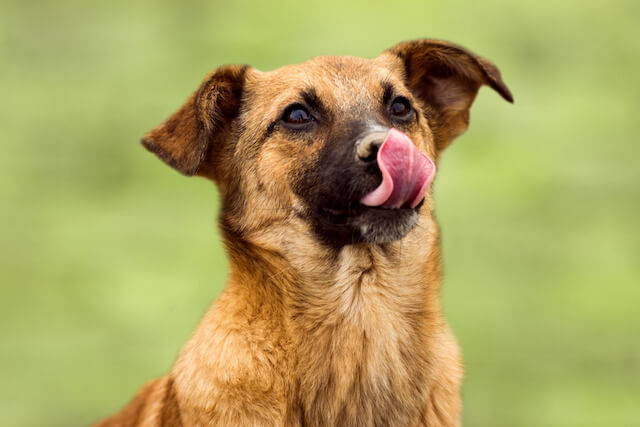 Dogs aren’t known for their sophisticated palates. Their tendency to eat first and react later can easily backfire on them. So when they get sick and experience symptoms like diarrhea, nausea, vomiting or a loss of appetite it may be easy for a pet parent to think it was that stolen helping of birthday cake.

But if these symptoms persist for weeks even intermittently they may be symptomatic of inflammatory bowel disease (IBD), a chronic condition that occurs when the lining of the gastrointestinal tract becomes inflamed and loses its ability to properly digest and absorb nutrients.

While the exact causes of IBD are not well defined and vary between individuals, Dawn Kingsbury, Chief Veterinary Officer at AnimalBiome, says there are several common factors at play among dogs with IBD.

“IBD is the result of a complex interplay of factors that include your dog’s genetics, i.e., some breeds are predisposed to it; environmental factors, which can increase your dog’s susceptibility to IBD such as, his exposure to chemicals and other animals, lifestyle and diet; the microbial population that lives in his gut, which if he has IBD, gets out of balance; and his immune system which becomes overly reactive or inflamed.”

If your dog has been diagnosed with IBD, you may already be aware that it can be as difficult to diagnose and treat in dogs as it is in humans.

“Often pet parents hope that their dog can have one test and get a diagnosis. With IBD a long list of tests all have to come back negative before the diagnosis of IBD can be given,” Kingsbury says.

And, while it’s fine for pet parents to rely on their regular veterinarian for IBD treatment, if you’re not seeing progress after two or three months Kingsbury says it’s reasonable to seek out a specialist. She suggests consulting www.vetspecialists.com for a list of local internal medicine veterinarians.

Here are some guidelines to help you navigate the path forward.

“Gastric dilatation volvulus or bloat can be hard to see in those breeds because most of their stomach is up under their ribcage. If a dog is acutely bloated, the stomach may have twisted and basically closed off the entrance & exit. Gas builds up. The blood supply to the stomach is cut off. GDV is a surgical emergency. If you see non-productive retching for 30 minutes in a large breed dog, go immediately to the vet.” 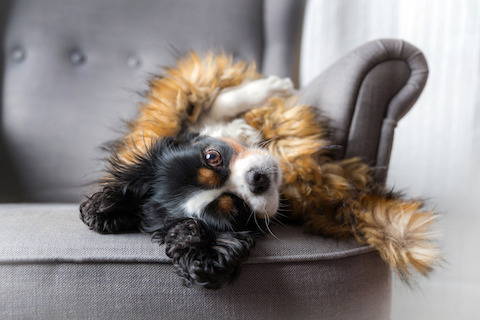 The first stage usually involves a series of treatment trials to eliminate a variety of other intestinal disorders. Kingsbury says your vet will initially test for pathogens and parasites and follow with a dietary trial at a minimum. Here is a link to a recent article directed at vets which discusses testing.

Fecal testing &/or deworming help to ensure that GI pathogens & parasites are not present in the GI tract and contributing to your dog’s GI symptoms.

Screening blood work often includes complete blood count, biochemistry and urinalysis. These tests are looking for clues of smoldering infection, anemia - low red blood cells which could indicate chronic GI blood loss, as well as to check other organs like the liver and kidneys which may show similar chronic signs when diseased. Blood work can rule out diabetes and other pancreatic diseases. Cortisol levels screen for Addison’s disease which is a hormonal disease which results in an inability to handle stress. Addison's may result in intermittent GI signs in mildly affected individuals to full blown acute bloody diarrhea and shock in severely affected dogs. Measuring vitamin B12 levels [which are critical to cell growth and proliferation] are important in any case with long standing diarrhea. Often this is done concurrently with folate levels, which can suggest gut bacteria imbalances.

Other diagnostic imaging tests may include x-rays, ultrasound or even CT depending on the particular case.

Kingsbury says endoscopy is the gold standard for determining IBD. Because it is costly, uses special equipment and requires anesthesia, your vet may exhaust all other possibilities first. Tissue biopsying involves passing an endoscope into your dog’s stomach and first part of the intestines and/or the colon to collect pinch tissue samples. These samples are then sent to a pathologist’s lab where they are evaluated under the microscope for inflammation: too many white blood cells within the tissue and changes in the architecture of the inside lining of the bowel wall, as well as looking for any underlying causes, such as certain infections or cancer. 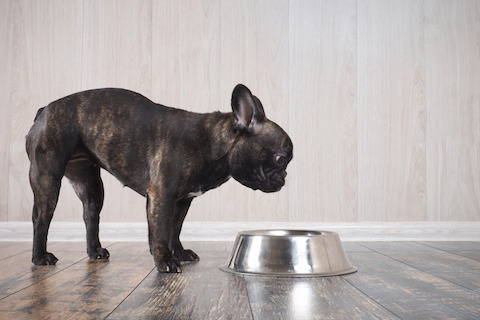 A food trial rules out the possibility that your dog may have a food intolerance or allergy. This involves exclusively feeding your dog a commercial or homemade diet of a novel or high quality protein that may not be part of his regular diet such as duck, bison, rabbit or venison. If this initial trial fails, then a second trial may be prescribed that consists of hydrolyzed protein, which uses water to break food into tiny particles that do not trigger the immune system.

Food trials are successful in about half of chronic diarrhea cases but they can be time consuming. Their success is dependent on whether you can completely control what your dog eats which means eliminating favorite treats and snacks, like occasionally finishing the cat’s food, during the trial.

“If a vet thinks they are doing an exclusion diet and doesn’t catch that the pet parent is feeding a lot of other things, which in some cases can add up to as much as 30 percent of the pet’s calories, then more than one diet trial is likely going to end up being done. That is needlessly adding weeks to the process, because it takes a couple of weeks to see the response. You can see how time can add up quickly, if your dog fails one trial and another trial is commenced for another two weeks. All the while, the offending food is the reward biscuits. Even nice neighbors have been found guilty of handing the goodies out. Everything that goes into your dog’s mouth has to be accounted for.”

Fiber supplementation can improve fecal character and composition of bacteria in the gut. Inulin is a soluble, prebiotic fiber found in many plants that can be used to add fiber to your dog’s food. Psyllium, the active ingredient in Metamucil, is another source of soluble fiber. One or two teaspoons of Fiber One cereal can bump the crude fiber content of a moist meal to 10%. Adding raw green vegetables is another good way to increase fiber.

Other dietary options may include feeding your dog probiotics or “good” gut bacteria that help crowd out the pathogenic or bad bacteria. Kingsbury says that dogs can improve with probiotics. But in most cases, the probiotics fail to colonize or take root within the intestine and a dog’s symptoms reoccur when the probiotic is discontinued.

B12 injections help to increase this vital vitamin when your dog’s ability to absorb it is compromised by chronic intestinal inflammation and imbalances in the gut bacteria. Recently generous oral supplementation has been shown to normalized levels.

In a lot of cases your vet will have prescribed an antibiotic initially or at least after your dog has failed the food trial process. Antibiotics are meant to help reduce inflammation and/or to restore the balance of normal dog gut bacteria. Here’s how you can support your dog during and after antibiotic treatment.

For dogs who don’t respond to any of the other treatment plans, an immunosuppressive drug such as prednisone, which is a steroid, may be prescribed for its anti-inflammatory abilities.

AnimalBiome offers an easy-to-use and affordable at-home Gut Health Test that instructs pet parents how to collect a sample of their dog’s stool for microbiome testing and evaluation. Once the sample is received by AnimalBiome, it’s accessed and interpreted and a personalized report is created with a road map of the bacteria and pathogens within your dog’s gut. If a moderate or severe bacterial imbalance is present then AnimalBiome's Gut Restore supplements (FMT capsules), which contain a mixture of well-screened dog-specific donor stool, are recommended.

AnimalBiome Gut Restore supplements have been 80 percent effective at reducing the symptoms of IBD in dogs.

“Fecal transplants are poop from healthy dogs given to sick dogs for the purpose of providing beneficial bacteria. This practice is very successful in curing people of Clostridioides, formerly Clostridium, difficile infection and is being used for both acute and chronic diarrhea across species. Unlike probiotics, which are predominantly bacteria from humans, fecal transplants are host species-specific, using a complex community of healthy dog bacteria, as well as other factors that healthy dog guts make to heal a sick dog’s gut. Hundreds of different, dog specific bacteria are added rather than one or at most a handful of human isolated bacteria which is the case with many probiotics for dogs. For example, Purina’s Fortiflora contains one probiotic bacteria - a Enterococcus faecium strain originally isolated from a healthy newborn human baby in Sweden in the 1960s. Probiotic bacteria very rarely colonize the gut. Giving a fecal transplant improves the chances of colonization and thereby can have a long-lasting beneficial effect,” Kingsbury says.

Over the long term some dogs are able to stabilize and don’t need to stay on supplements. But others may relapse and need to redose.

“The ultimate goal is to maintain good health on the lowest effective dose of medication. Tapering takes place over months. If signs recur, the history is scoured for triggers. Medications are restarted at previously effective dosages. Some dogs will ultimately be able to be controlled with minimal intervention such as fecal microbiota transplantation and fiber supplementation, while other dogs need ongoing medications,” Kingsbury says.

“IBD is a case-by-case determination with regards to the likelihood of whether your dog will be able to go into remission and be weaned off all treatment. This is more likely for a young dog that responds to a food trial. That dog has a good prognosis. If an old dog has low proteins and a long standing history of GI signs, then that dog unfortunately has a poor prognosis” Kingsbury says.

IBD is a complicated disease that can affect your dog’s overall health. Although there’s currently no cure for IBD, Kingsbury is optimistic.