Periodontal Disease in Dogs: New Ways to Protect Your Dog 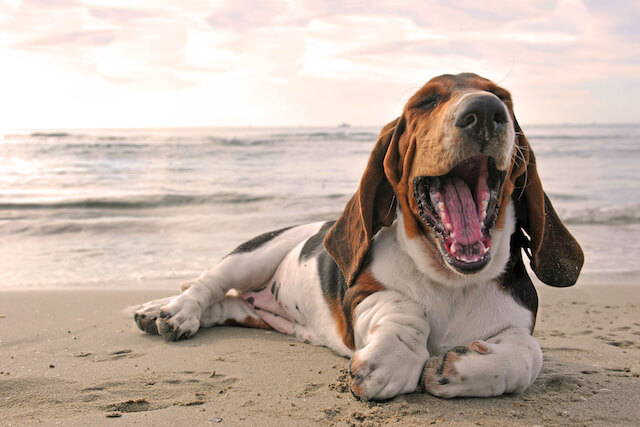 Stinky dog breath! It could mean gum disease. In fact, 80% of dogs have some degree of periodontal disease (gum disease) by the age of three. Daily toothbrushing can help, but for many pet parents that’s easier said than done. Luckily, there are new, oral microbiome-based approaches to keeping your dog’s mouth healthy. We’ll explain why your dog's dental health is such a huge factor in overall health, and we’ll tell you how the new approaches can help you add years to your dog’s life.

What Is the Oral Microbiome?

Just as the gut hosts a diverse community of bacteria, collectively called the gut microbiome, the mouth—at the very beginning of the digestive tract—has its own community of bacteria, known as the oral microbiome. While AnimalBiome CEO Dr. Holly Ganz studies the bacteria that live in the gut, Dr. Emily Stein and her company, Primal Health, study the bacteria that make up the oral microbiome.

In addition to taking in and breaking down food and water, the mouth also provides a vulnerable place where “bad” bacteria and toxins can enter the body. Living on the teeth, tongue, gums, and other surfaces of the oral cavity are beneficial bacteria that help the immune system to protect the body against invasion by these potential pathogens.

Bacteria in the Mouth Can be Divided Into Two Main Categories:

1. Beneficial bacteria normally found in healthy mouths that live on the surfaces of the cheeks, tongue, gums, and teeth, and 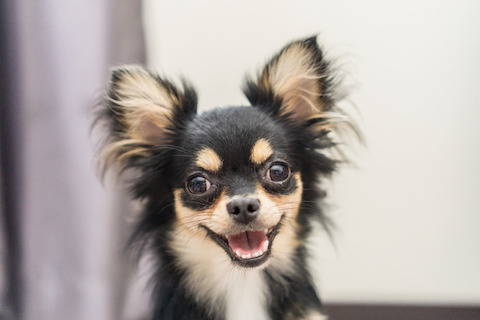 By the age of three, 80% of all dogs have some degree of gum disease. Smaller breeds tend to have more oral health problems than larger dogs, mostly because they drink less water (which washes some bacteria out of the mouth) and produce less saliva (which contains natural antimicrobial agents). Age is a big factor too. Dogs and humans both tend to develop more dental disease as they get older.

When bacteria eat sugar (a carbohydrate), they excrete acid, which attacks the protective mucosal lining of the mouth and makes it “leaky.” When bad bacteria pass through those microscopic holes they’ve made in the gum tissue, they trigger an overactive response from the immune system, which leads to inflammation—in other words, red, sore, infected gums.

The acidic waste of those bacteria is also stinky. That’s why the first sign of gum disease that a dog parent notices is usually bad breath.

Why Gum Disease Can Be Life-Threatening 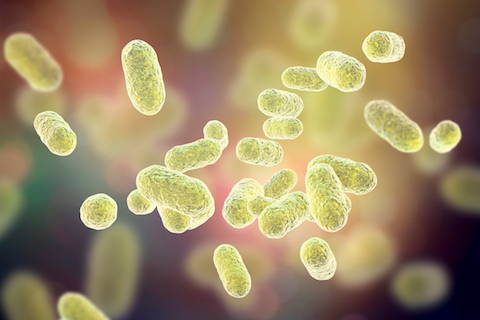 But an unhealthy mouth doesn’t just cause bad breath. As gum disease progresses, it can cause pain, lead to tooth loss, and require expensive dental procedures.

Even worse, gum disease can lead to other serious health problems, including heart disease, cancer, kidney disease, and dementia. Those bad bacteria in the mouth produce compounds that cause inflammation throughout the body, and chronic inflammation has been found to be the main culprit in many diseases. Porphyromonas bacteria, for example, which are prominent in gum disease, have been directly linked to Alzheimer’s in humans. (Dogs get dementia too. Beagles, which tend to have a lot of oral health problems, are especially prone to dementia.)

And any infection in the mouth can spread to other parts of the body, require powerful antibiotics (which can disrupt the gut microbiome), and potentially lead to sepsis, an immune system overreaction that can be fatal.

Because its effects extend far beyond the mouth, gum disease may end up shortening a dog’s life by as much as a third. 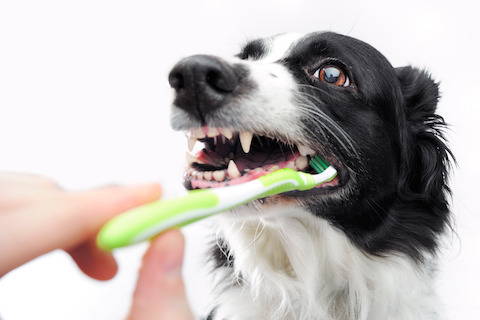 You’ve probably been told you should be brushing your dog’s teeth every day, but that’s easier said than done. A lot of dogs just won’t cooperate. In fact, less than 20% of dog parents actually brush their dogs’ teeth.

If you and your dog can manage it, daily toothbrushing does help prevent the buildup of plaque and tartar that can house populations of bad bacteria. But 60% of each tooth is hidden under the gumline, where brushing can’t reach. And that’s where bacteria flourish.

What about dental chews? They’re popular with dogs and pet parents alike, but most of them contain carbohydrates (in the form of potato starch, chickpea flour, wheat, or rice), which actually feed the disease-causing bacteria.

The most common approach to oral health for dogs consists of annual dental cleanings done by a veterinarian. These professional cleanings do reach far enough below the gumline, but they require general anesthesia, which may be risky for dogs with other health issues. And unfortunately, one cleaning a year—or even every six months—isn’t enough by itself to control the bad bacteria, which are working day and night to cause problems.

Now for Some Good News!

Find out if your dog has a healthy mouth. Fortunately, we have new science and technology at our disposal to detect and treat problems in your dog's mouth before they lead to worse health issues. Now a simple at-home Oral Health Test can tell you if the bacteria associated with gum disease are overpowering the good bacteria in your dog’s mouth. And if the test shows an overgrowth of those bad bacteria, a new dog prebiotic (water additive) product can help the good bacteria win.

How Does TEEF! Work? 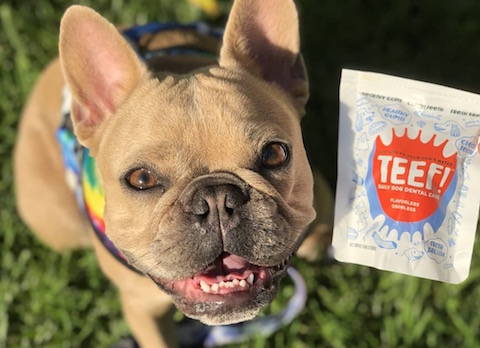 TEEF! is a human-grade prebiotic powder you add to your dog’s water bowl. It’s a safe, easy way to keep your dog’s mouth healthy between veterinary cleanings, and it actually targets the root cause of gum disease—the overgrowth of those inflammation-causing bacteria.

The main ingredient in TEEF! is a soluble fiber—a prebiotic that feeds the oral bacteria and blocks their ability to take in carbohydrates. The prebiotic also has the effect of starving the inflammation-producing bacteria (the ones that eat the waste products of the carbohydrate-eating group).

At the same time, the vitamin B6 in TEEF! supports the populations of good bacteria. Some kinds of bacteria—Bacteroides and some strains of Clostridium, for example—produce compounds that reduce inflammation, so we want to encourage those. The prebiotic mix for dogs also contains amino acids, which stop bacteria odor and prevent plaque buildup, and sodium bicarbonate, which neutralizes the acid produced by sugar-eating bacteria and whitens the teeth. TEEF! works best in conjunction with daily toothbrushing and regular cleanings by a veterinarian.

In four years of studies involving more than 150 dogs, 100% of dogs that used TEEF! showed a reduction in the bad bacteria that cause dog dental disease, even below the gumline.

Holly analyzed her own dogs’ oral microbiomes before and after using TEEF! for two weeks, and she found notable changes. At the end of those two weeks, the amount of anaerobic (smelly) bacteria, including Porphyromonas, had decreased in both Charlie’s and Darwin’s samples, and aerobic bacteria had increased, indicating that the bacteria living in their mouths had responded appropriately to the intervention. She also noticed that their dog breath smelled better and less “doggy.”

How our Dog Oral Health Test and TEEF Work Together

How healthy is your dog’s mouth? AnimalBiome’s new Oral Health Test can tell you. This easy at-home test allows us to analyze the current status of your dog’s oral health and tell you whether it’s time to schedule a dental cleaning. We’ll send you a testing kit that includes swabs for sampling the gumline of your pup in the comfort of your own home. Collect a “before” sample, add TEEF! to your dog’s water for 14 days, then collect an “after” sample. Send us both samples in the prepaid mailer, and we’ll let you know how your pup is responding to TEEF! (Our Oral Health System includes a one-month supply of TEEF! as well as two Oral Health Test kits.)

You can learn more about TEEF! and Primal Health, LLC, on the TEEF! website.

Figure out what is really going on inside your dog's mouth.